All life – plants, animals, people – need the right amount of water – not too much, not too little – people in the time of the story of Noah knew that, too – too little, can’t grow food – too much – pushed out of homes, whole towns.

Still happens – drought in California, in the U.S. – in Sudan, in Africa – floods just this END_OF_DOCUMENT_TOKEN_TO_BE_REPLACED

Yesterday, for our Annual Meeting and conference, PA IPL member University Mennonite Church hosted the worship service.  Following the opening hymns, Bethany Spicher Schonberg offered a fantastic children’s message that could be used in many contexts and any faith community.   On request, she wrote it up for us.  I hope many of you will use it!

Materials needed: a globe, a giant boot, a tiny toy shoe (the one from Monopoly works great)

Show children the globe. What do you see here? A globe, yes. This is a way for us to imagine the world – the earth – because the real one is too big for us to see! We’re sitting on the earth right now, right about here. Show location on the globe. Who made this earth that we’re sitting on? Who made the light, the sky and oceans, trees and animals and all the continents that we see on the globe here? God did. And God gave this earth to us to care for and to walk on.

Now, there are two ways that we can walk on this earth. We can walk in big shoes or little shoes. Show two shoes. If I were to step in the mud with this shoe (show giant boot), what sort of footprint would I make? And what if I stepped in the mud with this shoe (show tiny shoe)? If I were trying to walk around this globe here, what shoes would work best? What if I wanted to dance on this globe?

This week, whenever you use something from the earth or throw something away, think about your footprint on the earth. Is it a big stomping footprint or a little dancing footprint? God gave us the earth to walk on and God can teach us to walk in smaller shoes.

Close with a prayer. 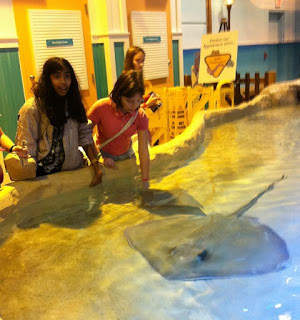 Alana, a fifth grader in Scranton, PA, and an active member of dad Rabbi Daniel’s congregation, wrote the following essay for the 2010 national writing contest sponsored by the PTA.  This year’s theme for the “Reflections” contest was “Together We Can.”  I’ll let her challenge you to think about how you can reach out with others so that… together we can survive.

If you’re interested in learning more about global warming and the impact of warmer, more acidic waters on reefs and fisheries, you can start with the National Wildlife Federation or Science Daily.  Please also consider asking your faith leaders to join others in Pennsylvania and across the country to speak about global warming during the national Preach-in.  Faith- and denomination-specific resources are available on the website, but please be aware that Pennsylvania has its own letter.

Hi – I’m a coral reef.  I’d like to tell you some information about the reef and the animals that surround and live in me.  Many people don’t know that a coral reef and its animals work together.  I’m going to tell you how in coral reefs, different species benefit each other almost all the time.  Without the plants and animals working together, I can’t survive, nor can they survive either. Coral reefs do many important things.

The reef even helps you too.  Without me, the population of people would be smaller.  You ask me how this is possible? I help you find medicines for people that are ill.  In fact, hundreds and hundreds of cures come from me! Another way that I help humankind is that I give you fish.  Over a billion people get some or even all their food (seafood) from reefs like me.  Also coral reefs protect almost all tropical coasts from dangerous waves and storms at sea. Coral reefs also give people happiness and jewels. Coral reefs make people wonder what the world was like long ago, and I give them some answers. Scientists visit me to find clues of the past, like fossils bones or shipwrecks.

Did you know that coral reefs have been going strong for over 60 million years?  That’s because of our cooperation together. Slowly the coral grows. Each of the thousands of little coral animals that make up the reef build a bit more of their hard coral home. Then more fish come.  Layers and layers of coral, animals and plants build up and finally together, we can all become a beautiful, giant healthy reef! That’s how I’m formed, though that’s not all of the cooperation that goes on around here.

A reef is not a reef without all the other animals and plants. Did you know that I give homes to most of the fish and animals, and in return, they protect me from harm? One example of how reefs work together with the animals is when I work with fish called convict tangs, which are vegetarians.  They nibble away seaweeds that will hurt me.  They get tasty food and I get protected. My most important partners are microscopic algae, tiny plants that live inside the tissues of each little coral animal. The algae use sunlight to produce sugar, and that sugar is one of my main food sources.

Now I’ll tell you how the other animals and fish work together. Did you know that gobies often share their coral reef homes with bulldozer shrimp? The shrimps are nearly blind, so whenever the bulldozer shrimp ventures out of its burrow, it keeps at least one antennae on the goby. The goby helps the bulldozer shrimp with just a wave of its tail. The goby alerts the shrimp of approaching predators.  Because of this warning, the shrimp can hide in time, before it gets eaten.  In a way, the shrimp gets a bodyguard, and in return, the goby gets a neat, hygienic home without lifting a fin.

Another way that fish work together is when it’s time for a dentist appointment. I know what you’re thinking – fish don’t get dentist appointments!  But in this case, they do.  A cleaner wrasse swims right into the customers (fish’s) mouth to feed on the parasites stuck on the fish’s teeth or gums. The “customer” gets rids of the parasites, and the cleaner wrasse gets a delicious meal, at least in the cleaner wrasse’s opinion. Stuff like this takes a lot of trust!  When was the last time you swam into another person’s mouth to get food?

You know how earlier I was talking about the convict tangs?  If too many are fished out, I can’t survive.  That’s why it’s very important not to overfish.  Almost all the time, you can’t tell which animals you truly need until it is too late. Same thing with the algae – without it, I would not be able to survive.  And without me, the fish that live in and around me would also not be able to live.  It’s like life in the reef is a big chain, all connected together.  All the time someone depends on someone else’s help.  Break the chain, and many species won’t be able to survive.

Many reefs around the world are dying from ocean warming and pollution.  When the ocean gets too warm, the algae in me dies, and if it doesn’t come back quickly, I will starve to death.  I will become a ghostly white. Oceans are getting warmer because people are burning fossil fuels, producing carbon dioxide, which warms the whole planet.  Some reefs are being choked by plastic trash that collects in ocean currents. Did you know that if people don’t stop polluting the world so much that in about in 30 years there will be barely any reefs left? That means that many species in the whole world will be extinct. Some people will lose their jobs and then a whole depression could start all over again. Another problem that could happen is some of the birds that eat the reef’s fish may not survive either. It would disrupt the whole ecosystem. 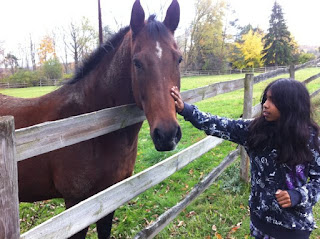 But there are many things you and your friends can do together to help make me healthier again – like not wasting energy and making sure to use less plastic and to recycle it more. Together we can make a difference — the information I told you, together with your actions, could stop all these problems — and the other reefs and I can be restored.

This is the end of my small essay of information on the coral reef.  These were just a few of the many examples of how a coral reef works together.  Because together we can survive.