President Trump’s announcement on June 1, 2017 that he will withdraw the U.S. from the Paris Climate Agreement has inspired a diverse chorus of condemnation from religious leaders and organizations in the U.S. and across the globe. If your tradition or denomination has issued a statement that you don’t see listed below, please let us know. And if your tradition or denomination has not yet released a statement, ask your leaders to do so—and send them this page of religious statements for inspiration!

But wait…there’s more! Religious Statements in Support of Paris Agreement and/or Climate Action

Carol Zandieh offered the following reflection on the glory of God and creation at the Spiritual Assembly of Baha’is of Harrisburg, a PA IPL member congregation.

The Words of God in the Baha’i Holy Scripture as revealed by Baha’u’llah, meaning the Glory of God, teaches that:

“All praise to the unity of God, and all honor to Him, the Sovereign Lord, the Incomparable and All-Glorious Ruler of the universe, Who, out of utter nothingness, has created the reality of all things, Who, from naught, has brought into being the most refined and subtle elements of His creation, and Who, rescuing His creatures from the abasement of remoteness and the pearls of ultimate extinction, has received them into His kingdom of incorruptible glory. Nothing short of His all-encompassing grace, His all-pervading mercy, could have possibly achieved it. How could it, otherwise, have been possible for sheer nothingness to have acquired by itself the worthiness and capacity to emerge from its state of non-existence into the realm of being?

“Having created the world and all that liveth and moveth therein, He, through the direct operation of His unconstrained and sovereign Will, chose to confer upon man the unique distinction and capacity to know Him and to love Him—a capacity that must needs be regarded as the generating impulse and the primary purpose underlying the whole of creation…Upon the inmost reality of each and every created thing, He has shed the light of one of His names, and made it a recipient of the glory of one of His attributes. Upon the reality of man, however, He has focused the radiance of all of His names and attributes and made it a mirror of His own Self. Alone, of all created things, man has been singled out for so great a favor, so enduring a bounty.”

I would like to end with a prayer that was revealed by Baha’u’llah, especially for all parts of the earth, to remind us that we are the custodians and keepers of the earth.

“Blessed is the spot, and the house, and the place,
and the city, and the heart, and the mountain,
and the refuge, and the cave, and the valley,
and the land, and the sea, and the island,
and the meadow where mention of God
hath been made and His praise glorified.”

Above image is Copyright © Bahá’í International Community, and is used courtesy of the Bahá’í Media Bank.

The Paris climate talks (the 21st such talks) began on Monday, November 30.  People around the world held vigils and marches on 11/29 and 11/30 to show our leaders that we are with them in spirit, supporting the difficult, urgent, vital work that they are engaged in.  The people’s voices —including faith voices— have been vital in getting international leaders as far along as we are.

In HARRISBURG, a multi-faith service hosted by Grace United Methodist Church was attended by about 120 people, and  made the evening news.  News coverage embedded at the bottom of this page (these links can expire quickly!)

Inspiring speakers included  Professor John Dernbach  (himself a Paris Summit delegate) and former PA Senator Franklin Kury (the author of Article1, Section 27 of our PA Constitution, and the recipient of our first PA IPL Visionary Award, back in 2011).   Father Jim Podlesny talked about the significance of the Pope’s encyclical and what it means for Paris.

David Glasgow, music director of Unitarian Universalists of Cumberland Valley, provided opening music, with congregational singing of  We Would be One, This is My Song, and Blue Boat Home.    Harrisburg Drummers added color and energy.

Readings and reflections were offered by leaders from the Religion & Society Center, Baha’ís of Harrisburg, Lutheran Advocacy Ministry of PA, Hadee Mosque, and PA IPL.

The event concluded on the Capitol steps with a rousing speech by former pastor and climate activist, the Rev. Jerry Miller, along with other testimonies, more drumming, and singing of Let There Be Peace on Earth.

in PARIS
Because of the attacks in Paris last week, planned marches and outdoor gatherings were not allowed, so the Place de la Republique filled with 10,000 pairs of shoes, “marching” without their owners.  Among them: Pope Francis’ shoes, and Ban Ki Moon’s shoes.

Nearly 10,000 people linked arms to form a human chain through Paris, stretched out along about 2km of the 3 km (2 mile) route of the planned march, rather than gathered in one spot.

Religious leaders delivered a multi-faith petition signed by nearly 1.8 million yesterday, and Cristina Figueres, the Executive Secretary of the UN Framework Convention on Climate Change, broke out into a dance with Archbishop Thabo Makgoba of South Africa, who was among those delivering the signatures to the talks. 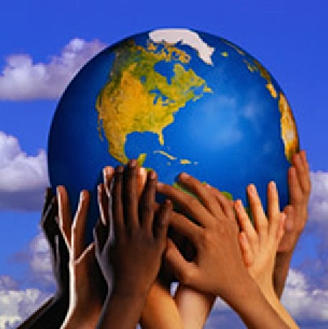 These teachings are not new to Catholicism, nor are they new to other faith traditions. Recent statements from religious bodies are statements amplifying  Laudato Si : In Care of our Common Home with deep teachings and specific language from their own traditions.  It is time to offer all the wisdom we have, from all sectors, as we seek to find new and just ways to live in our Common Home.  Religious leaders recognize that. END_OF_DOCUMENT_TOKEN_TO_BE_REPLACED

In 2014, the Baha’is of Harrisburg once more participated in the national IPL Preach In on Climate Change, but they decided to use the Preach-In materials as a springboard to go a little deeper this year.  They did a study series of relevant Baha’i scripture, then showed the Chasing Ice DVD twice — once in a public venue (a reservable library room they used for last year’s event) and then also convened at a member’s a home, where they could have a bit more time to both discuss what they had seen in depth. That meeting was on a weeknight at dinnertime — with Bring Your Own Pizza solving the dinnertime food challenge.*

The group reports: Together we studied the Baha’i Holy Scriptures on how to become better stewards of the earth on principles such as: origin of the universe, nature, ecological principles END_OF_DOCUMENT_TOKEN_TO_BE_REPLACED

Thanks to Hope for Creation, Australia, for permission to repost.  Hope for Creation is a Christian organization, but people of all Abrahamic traditions share the scripture that is the basis of this piece.  The excellent links are also curated by HfC.

Imagine being told that you must live within limits.

Imagine hearing God’s voice saying that you may not consume every last resource in the garden, no matter how attractive, now matter how wonderful its rewards. They are there to be enjoyed, but there are limits.

“You may freely eat of every tree of the garden; but of the tree of the knowledge of good and evil you shall not eat.”

Imagine prizing your freedom and your capacity to scoff at limits above obedience. END_OF_DOCUMENT_TOKEN_TO_BE_REPLACED