Rev. Cheryl Pyrch of (PA IPL member) Summit Presbyterian Church graciously shared her sermon from the 2013 National Preach-In on Climate Change.  For the non-Presbyterians out there wondering how she chose this reading from the many, many possibilities: many liturgically-based Protestant Christian denominations use the Revised Common Lectionary, a three-year schedule of Bible readings that specifies the texts that will be preached on a particular Sunday.  If your time is short today, skip to the last 3 paragraphs.  I have no doubt that you’ll come back for the rest. 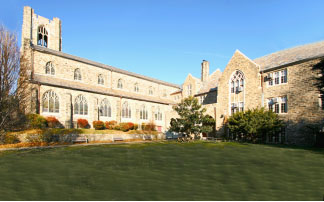 Our first scripture today, although dated in  specifics, tells us how to love.   By taking care of the land, this earth that God has given us to live on, and by caring for all God’s people upon it.   By giving thanks.  By standing with the alien among us.  By remembering the poor, the oppressed, the refugee — as God remembered our ancestors in Egypt.  So let’s follow the example of Jesus.  Let’s take ourselves off the pinnacle.  Let’s  repent from our self-destructive ways and raise our voices together.   Let’s renounce evil and its power in the world, and love God with all our heart, and mind and strength, loving our neighbors as ourselves.  Let’s fight climate change.
Rev. Cheryl Pyrch
Summit Presbyterian Church
Luke 4: 1-12
February 17, 2012 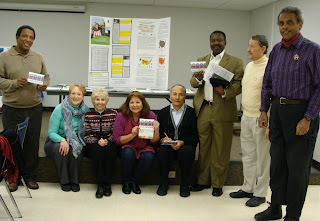 Become a Better Steward and Trustee of the Earth
The members of the Baha’i Faith in Harrisburg, PA held a very inspiring and educational event on February 9, 2013 as part of their “Devotionals and Firesides” series. The goal of this event was to study and reflect on the Holy Scripture of the Baha’i Faith which teaches how the universe and the earth were created. The earth was formed very similarly to the human body in that every organ and segment of it has a critically important role for the life of that creation. We also have to understand the importance of the ecological balance of nature which sustains all lives that depend on it. 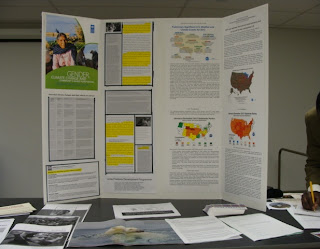 Also, there were displays with pictures, graphs, and statistics showing the effects of the climate change on the earth. Another display showed examples of how we all can reuse, recycle, and make useful things with those items.
We will have another gathering to see The Hungry Tide DVD sent by Interfaith Power & Light, followed by discussion and planning for future actions and programs.
Submitted by
Behzad Zandieh

10:30 AM  Training in the Frizzell Room of the Pasquerilla Spiritual Center (corner of Curtain and Allen on campus, right across from the libraries)

Pennsylvania Interfaith Power & Light is proud to sponsor the first student IPL in the nation—thanks, Penn State students, for being part of the climate change solution!

This letter from PA IPL member and former intern Barb Donnini was published in the Good Steward Campaign newsletter, as well as in the Centre Daily Times here.


A Simple Wish
I wish for an excellent quality of life for every human being, for biodiversity and for a great outdoors to exist for my children.It is for these reasons, and my desire to follow moral guidelines, that I am deeply disturbed to learn of people who think climate change is not real, but is instead an elaborate scam to raise taxes.The World Health Organization estimates that 150,000 deaths are directly attributable to climate change.In a sick ironic twist, the people hurt the most by climate change aren’t emitting the most (or even a lot). The most affected nations are the poorest. Their citizens are barely able to subsist day to day, let alone pay to cope with the new effects of climate change on their communities (extreme drought in Africa, for example).What’s being asked of all of us is small: Conserve energy in your home and encourage clean energy projects. This doesn’t mean changing your political party. It means signing an online petition, helping a nonprofit or supporting national policy that increases renewable energy usage.Even if you still aren’t convinced, we can all agree that conserving energy is a good thing, if just for financial reasons.I’d like to believe that most can identify with right versus wrong, fair versus unfair. It isn’t fair that we use much more energy than needed while so many others feel the consequences.We have one chance at preserving the planet – the risk is too great to do nothing.

This letter from PA IPL board president Rev. Bill Thwing was published on 12/10/2012 in the Johnstown Tribune Democrat

While headlines scream that a “fiscal cliff” looms and that Republicans and Democrats can’t reach agreement, another, smaller story whispers that China and the United States have traded places as world economic powers.

Apparently, as recently as 2006, the United States was the largest trading partner around the world, with 127 countries versus China’s 70.

By 2011, that ratio had reversed, with China now serving as the largest trading partner for 124 countries and the United States serving 76.

A second article catching my attention was “Study: CO2 emissions increase by 3 percent.”

Worldwide, we’ve added nearly 9 ppm of CO2 emissions in only one year! That’s a huge change.

In 2006, CO2 was advancing by only 1 ppm per year. It looks to me like we humans are heading for a “carbon cliff.”

All these cliffs can be avoided simply by agreeing to work together on solutions for the common good.

The link to the letter online is here: http://tribune-democrat.com/editorials?start=10 Rev. Thwing’s is the second letter.

For immediate release December 12, 2012
Also posted online right here!
For more information: (contact Cricket Eccleston Hunter at chunter@paipl.org/814.876.2597)
Pennsylvania congregation wins national honors
Faith communities lead the way on saving energy, addressing climate impacts
In a year marked by increasing climate disruption, a Johnstown congregation has been honored for its participation in the 2012 Cool Congregations Challenge.  St. Paul’s United Church of Christ has received an Honorable Mention for its efforts in Engaging Congregants and Communities, and is among more than three dozen congregations honored this year by Interfaith Power & Light, a national organization mobilizing a religious response to global warming.
“This year, we have witnessed the catastrophic impacts of global warming, from Superstorm Sandy to widespread drought, floods and wildfires,” said The Rev. Canon Sally Bingham, founder and president of Interfaith Power & Light. “As people of faith, we know that it’s not enough to talk about climate impacts. We need to take action now, and these congregations are leading the way with their creative and meaningful projects.”
St. Paul’s UCC’s interim pastor, Rev. Bill Thwing notes that as a result of their outreach work, St. Paul’s decided to became a “Creation Care Church.” In the process, they have gained new regular worship attenders.  Members of the congregation have stepped forward and taken initiative to share the congregation’s work; many congregants see their creation care work as part of the congregation’s effort to become a “mission-based church rather than a membership-based church.”
Pennsylvania Interfaith Power & Light helps Pennsylvania faith communities save energy and advocate for clean energy policies. Learn more at www.paipl.org.
For more information on the Cool Congregations Challenge, including success stories and congregational and individual carbon calculators, see www.coolcongregations.org.