END_OF_DOCUMENT_TOKEN_TO_BE_REPLACED

PA IPL past president (and current co-secretary Sylvia Neely) was honored on April 25 as the Volunteer of the Year for Interfaith Human Services, where she also sits on the board.    Not our usual blog entry, but her citation deserves sharing.  We hope it may inspire others to create similar avenues for outreach, compassion, and emissions reduction in their cities and towns.

END_OF_DOCUMENT_TOKEN_TO_BE_REPLACED

View the PBS Religion and Ethics Newsweekly episode Religion and the Environment, aired April 19, 2013 (featuring the cyclists both on their bicycles and cleaned up in the halls of Congress).

Before you head out to the wider ‘net, scroll down to see the elevation change pictures from the cyclists, thanks to Dave Hunter’s nifty GPS watch.   The first-day ride was a little longer than it appears — he forgot to start the watch until the end of the community ride.

END_OF_DOCUMENT_TOKEN_TO_BE_REPLACED

Bill Sharp is founder of Transition Centre, cofounder of Transition Town State College, and member of the Board of Pennsylvania Interfaith Power & Light.  He has been involved in environmental issues since youth and has four decades of experience in project planning and management and community development.  He has worked in government, higher education and private business.  He is currently working on developing a New School of Living based on the educational principles of Ralph Borsodi.  He was a member of the Public Information Forum task force that developed the Marcellus Shale Forum in April 2012.  This article is a product of that project.  Bill is also a member of the Board of PA IPL, and is an active member of the Baha’i community.
END_OF_DOCUMENT_TOKEN_TO_BE_REPLACED

Rev. Mark Hayes of (PA IPL member congregation) Unitarian Universalist Fellowship of Centre County has generously shared the sermon he preached for the National Preach-in on Global Warming.
Let me start by saying that this service this morning takes place in the context of a growing interfaith religious commitment to address global warming and climate change. The National Preach-in on Global Warming, in which we are participating today, is an initiative of Interfaith Power & Light, a national organization whose mission is “to be faithful stewards of Creation by responding to global warming through the promotion of energy conservation, energy efficiency, and renewable energy.”
END_OF_DOCUMENT_TOKEN_TO_BE_REPLACED

It is good to be back in State College, where spring comes at a more normal pace. It was 92 degrees yesterday in Washington as we walked the halls of Congress, and it seemed that the cherry trees that had only just blossomed were already losing their beauty in the hot breeze. 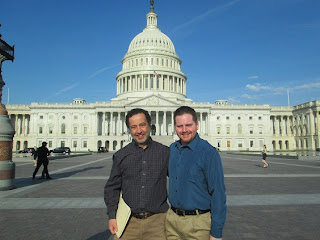 This was my second time visiting our Congressional representatives, and I absolutely recommend that everyone go to Washington to do this at least once in your life! Dan Tomaso (Ray’s grad student who drove the van down from State College to transport the tandem back home) came along for some of the visits and said afterwards that he came away feeling much better about his government than he ever had before.
I understand what he means. Our Congressional representatives may seem far away, but I really get the sense that the whole place is designed to provide access to any citizen who makes the effort. All the office buildings are open to the public, and the security lines were better than most airports. Every office door says: “please enter” and when we did, a receptionist was always friendly and happy to help.
Cricket made all of our appointments in advance, and when she writes and asks for an appointment to talk about climate change (not everyone’s favorite subject), they carve out some space in their busy schedules. Generally, this means 15 minutes with a legislative aide, but sometimes it’s more. 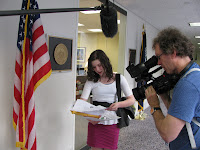 We separated into three teams: Jess and Hannah met with aides to both our senators, and they were very solicitous of Hannah. When she brought out the more than 100 prayers and drawings she had collected, they were delighted, even making copies of several for their own records. The PBS cameras were right there to record the moment as well.
I was with Ray and Dan, and our most surprising meeting was with Jordan Clark, chief of staff for Rep. Glenn Thompson, Republican for PA-5. Rep. Thompson is my representative, so I was particularly pleased to have the opportunity to speak with someone in the office.
A few things about this visit were unusual. In the past, we have spoken with John Busovsky, a staffer who specializes in energy issues – John joined the meeting, but it was Clark who controlled it. Also, meetings are often in cramped quarters, even out in the hall, but Clark sat us down in GT’s own spacious office. Finally, meetings are usually quick and intense, but we sat and discussed the issues for over an hour. 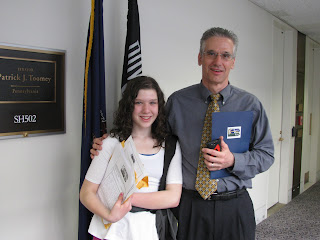 True to what I had heard about him, Clark is a tough old politico: he had no interest in our bike trip or Hannah’s letters; he feigned ignorance about climate science and tried to goad Ray and me into arguments over alternative energy and carbon taxes. He was playing with us to see what we were made of.
Far too much happened during that meeting to record here, but about 30 minutes in there was a palpable shift in his tone. I guess he realized that we were serious about finding truly pragmatic solutions to this civilization-challenging crisis. He emphasized his own concern for the poor and for the environment, and invoked his Catholic faith. He seemed genuinely interested in our energy efficiency programs (especially our cooperative venture with Interfaith Human Services) and even offered that at some point, perhaps “GT” (Rep. Thompson) could even help us with an insulation project.
This sort of shift is precisely what I was hoping for. I am convinced that climate change is too big a problem to be caught up in partisan politics. All parties have to be involved in the solution, and there are many ways that we can work together, at least on some short-term solutions.
As we now settle (or rather crash) back into our normal lives, my thoughts turn to the members of our immediate families who kept things running for us while we were away: Barb, Jean, Jim and Louise, and Paula. I know I speak for everyone when I say that this trip would not have happened without your support – thank you! 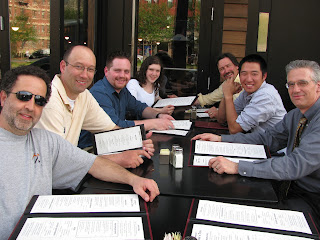 Finally, I want personally to thank my fellow cyclists: Andy, Dave, Hannah, Jess and Ray. You were terrific, and your good humor in the face of small adversities was very much appreciated! I can’t imagine a nicer group of people to spend five days with.
See you all next year!
Jon
(to see my whole blog, click here)
(to see Hannah’s blog, click here)