WE MADE IT! We all arrived, safe and sound. What an exhilarating trip. From Joyce’s gourmet breakfast to our interviews with a national program for PBS, to the heroes’ welcome at Gallaudet, it’s definitely a day I will never forget. 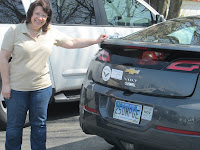 We started the day with lots of coffee and animated conversation with Joyce and Dave over a breakfast of eggs benedict, asparagus and hollandaise sauce (I had seconds). Jess and Hannah soon arrived and gradually we made our way over to the Café 107, where we met with some local high school students on their lunch break. After hugs and pictures, Joyce took off in her Chevy Volt and we got back on the bikes.

It was an easy ride down to the tow path, and for the next four hours or so we rode along and enjoyed the scenery. I was particularly delighted when, just around the stunning Great Falls of the Potomac, my old friend from high school Bill Luecke showed up. Bill is a materials engineer with the National Bureau of Standards and something of a biking fanatic. We caught up on each others’ lives (after probably 25 years) while riding along with the crew – oh, and the blue herons, turtles, vultures and lots of gnats that accompanied our ride.

There’s nothing quite so spectacular as arriving in Washington, DC from the Potomac. The city hits you first with its brawn: huge bridges, overpasses, concrete embankments. Then, very quickly, you spy the towers of Georgetown, the Kennedy Center, and the Washington and Lincoln Memorials. It is amazing and kind of awe-inspiring. 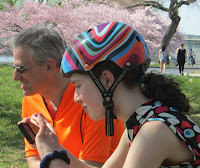 In between riding and talking with Bill, I was also on the phone, trying to arrange our meet up with the camera crew from Religion & Ethics Newsweekly, a PBS production. They were doing a piece on Sally Bingham, the founder of Interfaith Power & Light, and got wind of our tour.  Much to our delight (and the camera crew’s dismay), the cherry blossoms were in full, glorious bloom. This meant that traffic was snarled, and (after a few missteps) we finally found one another at the Jefferson memorial.
Camera takes, film footage, interviews and such took about 2 hours in the blazing heat. We had all run out of water and were pretty tired. But everyone soldiered through with good (enough) humor. Plus, with those gorgeous cherry blossoms and our main task accomplished (we did it!), it was hard not to be psyched. The craziest thing was when the camera man grabbed Hannah’s seat on the tandem and told Jesse to ride around so he could film on the bike – wild! 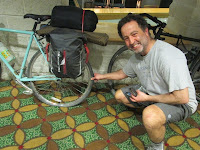 Then, we made the last, final trek up the mall to Gallaudet – 4 miles and no biggie, so you would think. But while our bodies were holding out, our bikes were not. After 200 miles, BOTH Dave and Ray got flat tires. Ray’s actually blew on the grounds of Gallaudet, so we ended up walking the last 500 feet to the Kellogg Center. Once again, though, Sally was there to welcome us, along with Cricket and many other IPL friends. Ray was moved to tears, and the six of us joined in a sweaty embrace! 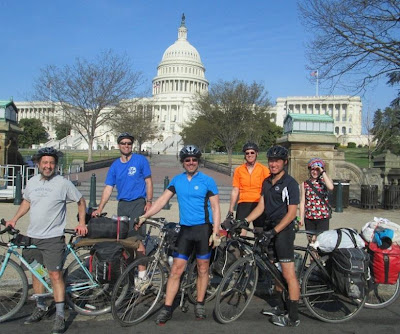 Tomorrow we head to the Hill, with many stories to share with our representatives. Thanks so very much for all your prayers and good wishes – we rode, but could not have made it without all of your support!